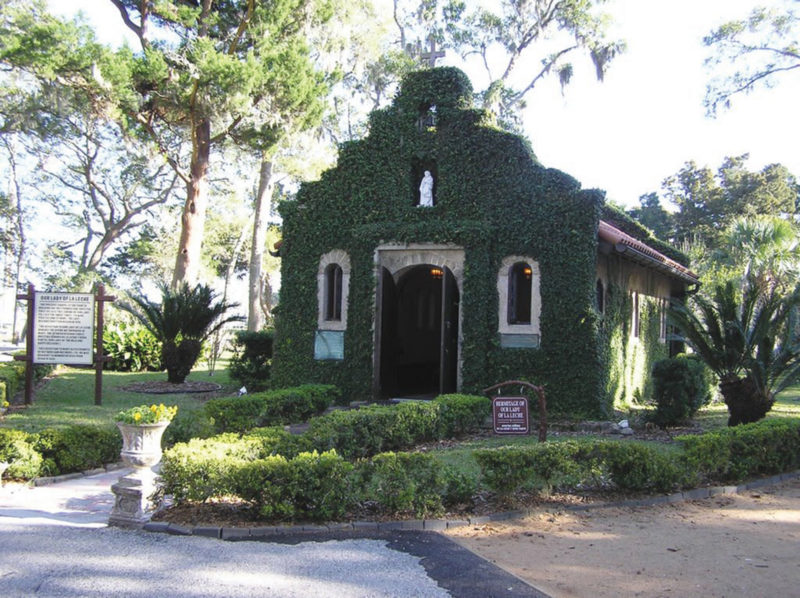 First Thanksgiving Was in Florida

Floridians don’t want to upend a beloved Thanksgiving tradition, throw out the turkey and banish the Pilgrims. But strong evidence exists that America’s first formal prayers of gratitude for good fortune, followed by a feast of thanks, took place at St. Augustine in 1565 — 56 years earlier than the traditionally accepted first Thanksgiving at Plymouth Colony.

The Spanish founded America’s first permanent settlement in 1565, and Spanish explorers celebrated the first Thanksgiving of Europeans in America on September 8 of that year. Archaeologists and historians have been able to locate the approximate site, which visitors can view today at the Mission Nombre de Dios and Shrine of Our Lady of La Leche in St. Augustine. A 208-foot-tall stainless steel cross both celebrates the founding of the city and marks the approximate location of the feast.

Instead of Pilgrims in tall black hats and broad white collars, robed Spanish priests and armor-clad explorers held a Catholic Mass, then shared a Thanksgiving meal with Native Americans, the tattooed, seashell-adorned Timucuans. The Spanish doffed their armor, the Timucuans dropped their stone-tipped spears for the occasion, and they shared food and fellowship. What brought about Florida’s earlier celebration? On Sept. 8, 1565, Spanish Admiral Pedro Menendez de Aviles, leading an expedition to claim the territory for King Philip II, landed at the St. Augustine site with about 1,000 soldiers, sailors, farmers, clergy, and artisans. On a makeshift altar, Father Francisco Lopez celebrated a Mass of Thanksgiving for the party’s safe journey.

A replica of the altar sits next to the shore in the general area where archaeologists believe the Mass was held. Eminent Florida historian Michael V. Gannon, history professor emeritus at the University of Florida, wrote about the occasion in his heavily researched 1965 book “The Cross in the Sand.” “The admiral had the Indians fed and then dined himself,” Gannon says.

Turkey was not on the menu. Instead, the first Thanksgiving’s main dish was a garlic stew called cocina, made from pork, garbanzo beans, and olive oil that the Spanish brought from their ships. They dipped hardtack in the stew and washed it all down with red wine. The Timucuans likely contributed a variety of wild game and fish, perhaps deer, mullet, catfish, tortoise, oysters, and clams.

Today, more than 200,000 visitors annually come to the mission and the shrine to stroll the grounds, worship, reflect and experience a new window into history. A large part of the attraction is the chapel that houses a replica of the statue of Our Lady of La Leche, the first shrine dedicated to Mary, mother of Jesus, in the United States. The original casket of Pedro Menendez de Aviles is on view at the mission museum, which tells the story of Catholicism in Florida. 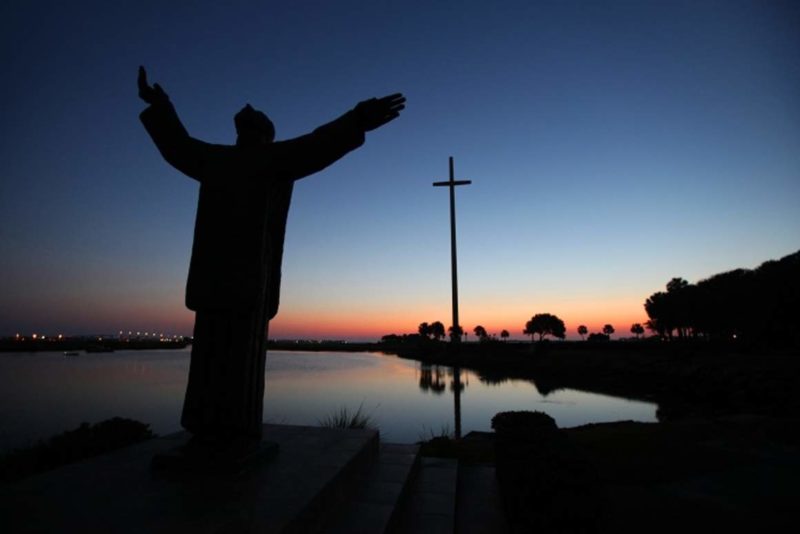 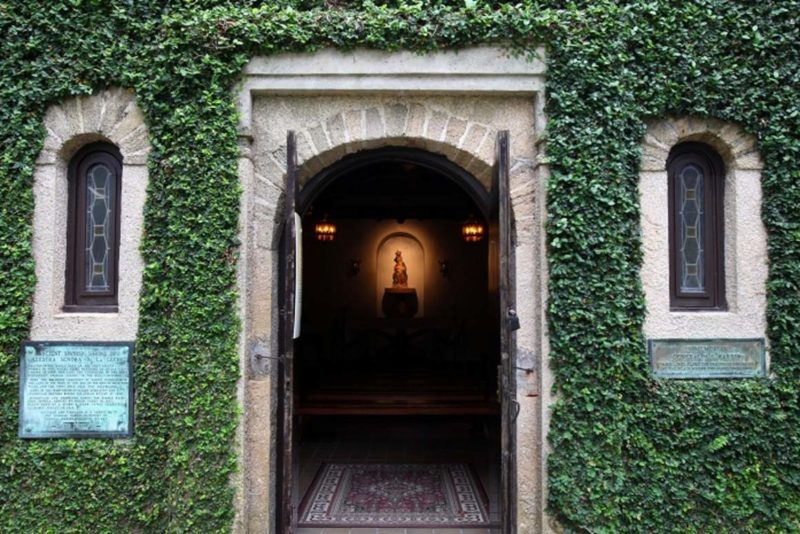 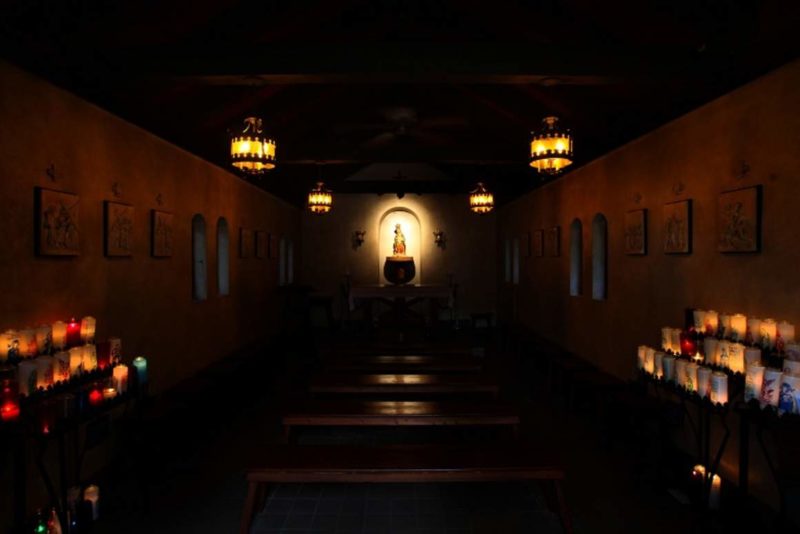 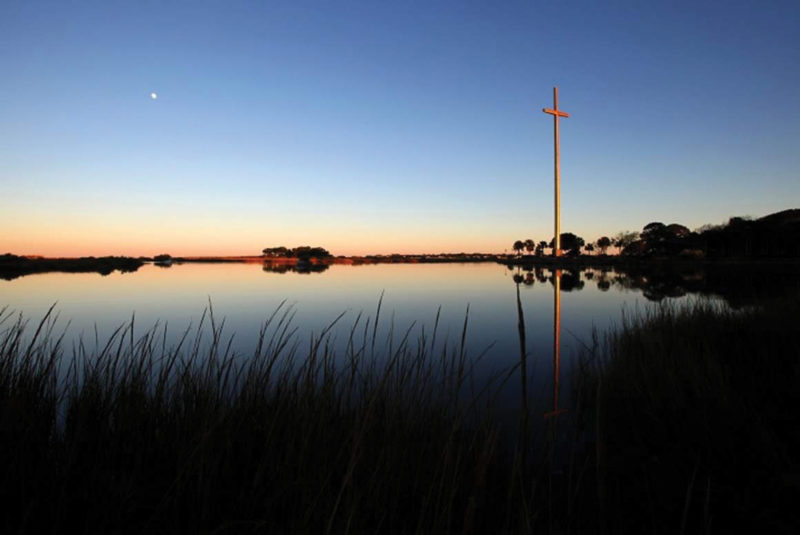 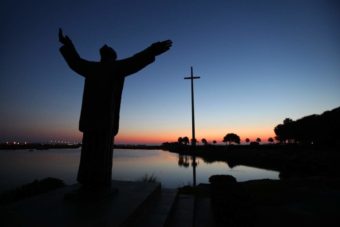 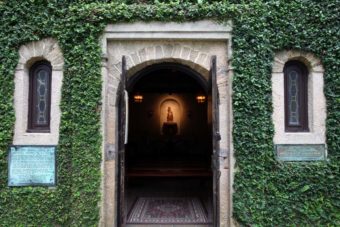 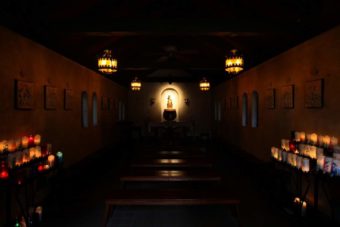 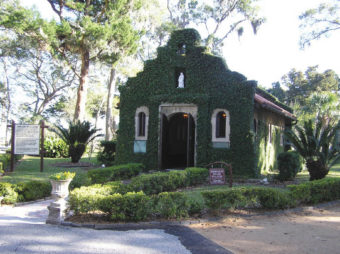 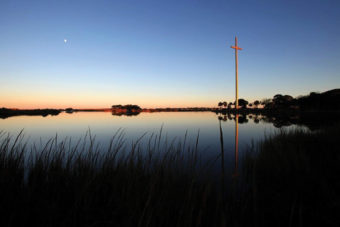