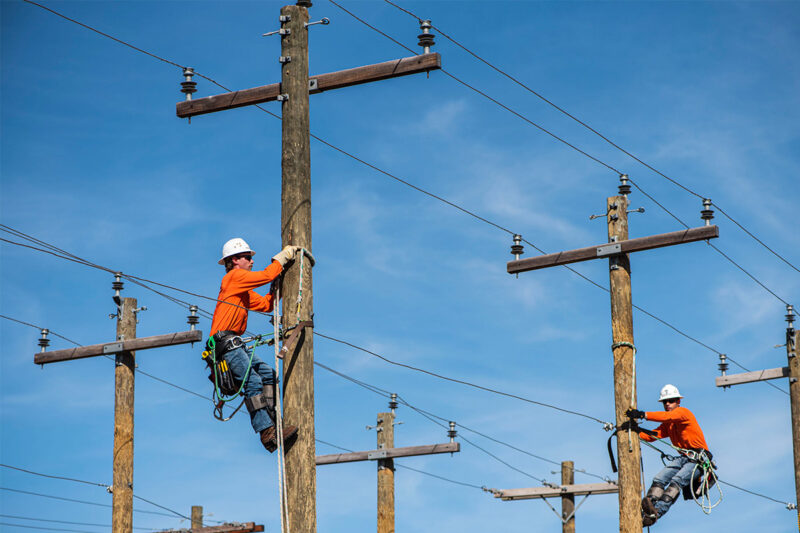 No matter how long you’ve been on the job, we could all use training from time to time. That’s especially true for the lineworkers at Suwannee Valley Electric Cooperative, where a careless mistake could put lives at risk.

Since 2014, SVEC has partnered with Northwest Lineman College (NLC) to provide off-site training for both new hires and experienced lineworkers looking to brush up on the latest techniques. While the cooperative provides its own job and safety training, the college offers unique benefits.

“With the off-site training, our apprentice linemen get to build a little camaraderie among themselves when they’re all starting this career together,” says SVEC Director of Operations Mark Mosley. “When they go back after we hire them, they get to see how other companies do things and bring some of those ideas back with them.”

Each year, Northwest Lineman College trains more than 8,000 lineworkers at its four campuses across the country. The Florida campus in Edgewater features a 16-acre field training area for trainees to work hands-on, an indoor smart grid and a transformer lab for working with the latest technology. It’s all supported by state-of-the-art classrooms.

But more than those amenities, what makes Northwest Lineman College the right partner for SVEC is its willingness to build a program around the cooperative’s needs, Mosley says.

“They teach students their curriculum, but not ways of working that are contrary to our own,” he says. “We follow Rural Utility Service specifications, and they adapted their program to teach that. So, our trainees aren’t being taught NLC’s way only to come back and do things our way.”

In the last year, SVEC started offering scholarships to the college for prospective lineworkers. Other than the cost of travel to and from campus, the scholarships cover all expenses. The program opens doors for people in the local community while also ensuring that any new additions to SVEC’s crews are ready to go on day one.

“Not every student who graduates from high school is going to go to college. Some can’t afford it and some just don’t want to go,” says Mosley. “But that doesn’t mean they can’t excel at a trade. Linework is a high-paying trade that requires a lot of training.”

Scholarship recipients aren’t SVEC employees immediately, though. First, they must complete NLC’s 15-week program. Afterward, they are guaranteed an offer for a full-time apprentice lineworker position at the cooperative.

With a new class of 3 scholarship recipients set to begin their training in January 2023, SVEC is on track to have gained more than 20 lineworkers through the apprentice program since it first launched in 2014.

“We feel like we get a more well-rounded employee when we do it this way,” says Mosley. “In the past, some employees have decided they can’t hack it after 6 to 8 months because it is hard work. But the 15 weeks allows us, and them, to determine if this is what they want. And if it’s not, we won’t have invested as much in them as we would if they had worked here a year.”

Even after new apprentice lineworkers get their feet under them, there is still a long way to go. Earlier this year, SVEC promoted its most recent graduates of the apprentice program: Adam Ford, Clay Stratton and James Williams.

In order to earn journeyman status, they had to return to NLC for 2 weeks annually over 3 years. In total, they completed a minimum of 576 hours of lectures, lab work and field instruction, in addition to 8,000 hours of on-the-job training. But Mosley is confident that the new scholarship program is preparing apprentice lineworkers well.

“When they finish the 15-week program, they’re ready the first day they leave the college and come here,” he says. “They even have their commercial driver’s license, so they’ve got enough training to get in our derrick trucks and drive to a job site pulling a trailer.”

Overall, the program has been a win-win, giving motivated workers in the community an opportunity to kickstart a good career while ensuring the cooperative has access to a steady stream of well-trained employees.

“With the first 3 young men that finished the program, we’re seeing that they’re further along than they would be under our old program where we’d hire people and immediately start them as an apprentice,” says Mosley. “It took 6 months to get those new employees to where these guys are in 15 weeks. So, they’re way ahead in terms of what they can do for our members.”