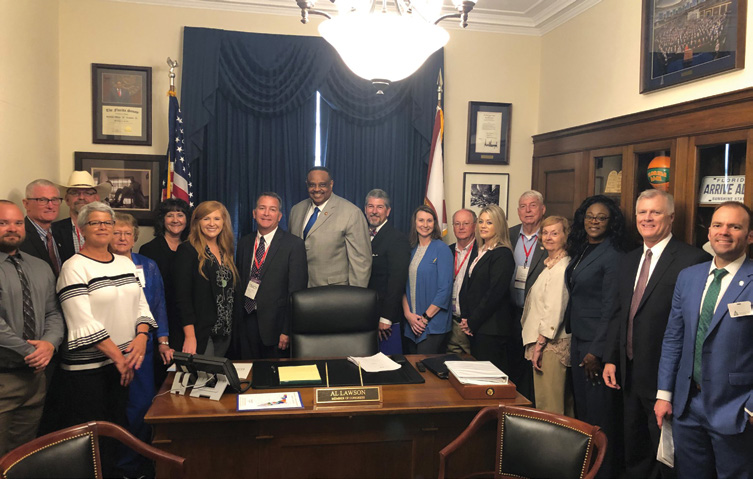 Our members know that Suwannee Valley Electric Cooperative is a little different from other utilities, whether they’re investor-owned or municipal systems. But for local lawmakers who may not be familiar with the cooperative model, those differences may not be so apparent.

That’s where the Florida Electric Cooperative Association comes in. FECA represents 1.2 million members getting electricity from 17 cooperatives throughout the state, amplifying their voice with legislators on both the state and federal levels.

“My job is to talk to those lawmakers and help them understand that cooperatives are not-for-profit, so every policy that impacts electric utilities also impacts our members and their constituency,” says FECA Director of Government Affairs Allison Carter.

The association also advocates for policies that will help Florida cooperatives complete their mission of providing safe, affordable, and reliable electric service to consumer members. Policy issues range from changes to property rights policies that could impact the land where cooperatives run their lines to how government agencies respond to hurricanes.

As discussions around climate change have increased on the federal level, issues around renewable energy have also come to the forefront in the state legislature. Carter helps lawmakers understand that Florida cooperatives are open to harnessing resources like solar energy, as long as those programs aren’t forced on them.

“We don’t care for mandated programs, because they might not work for every scenario,” she says. “Our goal is to relate that, as cooperatives, if there are new financial costs, we have to go to the members and ask them to pay for it. That has a significant impact.”

If there is one issue that has dominated Carter’s time over the last couple of years, it’s a bill known as the RURAL Act. The bill seeks to undo changes to how cooperatives receive FEMA and other assistance made by the Tax Cuts and Jobs Act of 2017, which designated grant money as nonmember income rather than as capital.

When hurricanes ravage cooperatives’ electric systems, as they have recently in the state of Florida, those co-ops spend a lot of money to restore service in a timely manner. Cooperatives can apply to have some of those repair-related costs reimbursed by FEMA, reducing the financial burden on cooperative members.

Under the 2017 tax revision, those payments are considered grants and are defined as income. That small change poses a big threat to the tax-exempt status of many cooperatives because they must receive at least 85% of their funding from members and no more than 15% from grants and other sources. If cooperative making repairs after a major storm receives FEMA grants exceeding that threshold, it would have to pass along the cost of the tax on the grant money to members already having to pay more due to repair costs.

Two Florida cooperatives are already facing that situation following Hurricane Michael, while three more may exceed the 15% cap when they finally receive grants to pay for repairs they made after Hurricane Irma.

Fortunately, as part of their visit to Washington, D.C., in April for the National Rural Electric Cooperatives Association (NRECA) Legislative Conference, SVEC employees discussed the importance of the RURAL Act with leaders including Reps. Al Lawson and Neal Dunn and Sens. Marco Rubio and Rick Scott. FECA has also built broad support for the bill, with 21 Florida lawmakers and over 230 legislators nationwide co-sponsoring it.

“We are very excited to have bipartisan leadership saying we’ve got to fix this,” Carter says. “So we hope that it will be resolved by the end of this year or tax time next year.”

Whether it’s on the federal or state level, advocating for cooperative-friendly policies is as much about education as it is about politics. In fact, Carter says she spends the majority of her time keeping track of incoming representatives and making sure they have a firm understanding of what cooperatives do.

“Right now we have built relationships with some members of the state legislature who are very familiar with electric cooperatives,” she says. “But with eight years being the maximum a legislator can serve, you’re constantly in a mode of educating new lawmakers about the electric utility world because it’s not an easy world to understand.”

As someone who is fairly new to the cooperative world herself, Carter is able to draw on her own experiences to help lawmakers better understand the electric industry. And while some people might find the cyclical task of educating lawmakers repetitive, she always enjoys getting to see the moment when everything comes together for them.

“The cooperative difference is what makes us so unique,” Carter says. “We’re not there to make money, we’re there to provide power and that’s it. So it’s always fun to watch and see the lights come on when new lawmakers realize how we’re different.”