How Florida's saltwater fishing management boundaries came to be 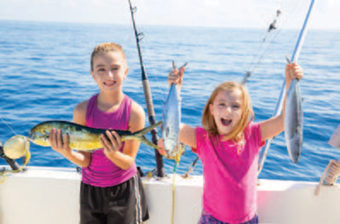 When you are on a boat, it’s hard to imagine boundaries. Above-water landmarks are few and far between. There are no signs that say, “now entering
federal waters.”

Regulatory boundaries are sometimes hard to fathom. In Florida, one of the biggest fishery management boundaries is that between state waters and federal waters. Sometimes regulations are the same in both state and federal waters, but not always, which is why it is important to know there is a line, and where that line is.

State boundaries in open waters of the United States first began to be defined in the 1940s, mainly due to concerns about rights for oil beneath submerged lands.

In a 1947 case, the U.S. Supreme Court ruled against California saying the federal government possessed rights in all submerged lands of the Pacific seaward of the low-water mark. Congress reacted by creating the Submerged Lands Act of 1953. This act declared that states owned the submerged lands, and the natural resources within, out to 3 nautical miles. The act included a provision that a state’s boundary could be extended if it was beyond 3 nautical miles from the coast prior to when statehood was achieved.

Florida immediately asserted their boundary went beyond 3 nautical miles before it achieved statehood in 1845 and that Congress approved its boundary when Florida was readmitted into the Union after the Civil War. The claim did not make it to the Supreme Court until 1960, where it was proven that Article I of Florida’s Constitution (1868), which was approved by Congress, described the boundary off Florida’s Gulf Coast as “three leagues from mainland.” Florida’s Atlantic coast boundary was settled at 3 nautical miles from shore.

There may not be signage, but it’s always important to know where you are. State and federal boundary lines are marked as the natural resource line on NOAA nautical charts, and these lines are also preloaded on most marine GPS units.

Need a map? Check out our maps page.