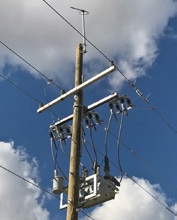 An ADMS enables a utility to automate the fault location, isolation and power restoration processes. The system’s provider, Advanced Control Systems (ACS), believes SVEC is among a select group of about 10 percent of the nation’s electric cooperatives that have adopted ADMS technology.

ADMS automatically detects the location of an electrical fault, automatically performs switching to isolate the fault, and then reroutes the flow of electricity to restore power to customers who are out but who are not in the section of lines where the fault is located. The entire process greatly reduces the amount of time many consumers are without power.

“We plan to complete systemwide ADMS implementation in the second quarter of 2019, with other improvements to reduce the duration of outages and the number of ‘blinks’ on the system to follow,” says SVEC Director of Engineering Kurt Miller.

Kevin Sullivan, CEO of ACS, says the decision to move to an ADMS platform is a big decision for any utility.

“We’re honored that SVEC chose ACS as their partner in this effort, and it’s always exciting to see a utility reach the milestone of their first automated restoration,” Sullivan says.