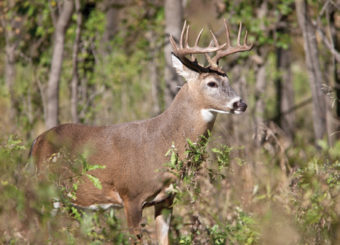 There are a lot of theories and differing opinions on what causes the white-tailed deer rut. To get to the science behind it and learn the facts about what impacts the rut, I asked the Florida Fish and Wildlife Conservation Commission’s (FWC) white- tailed deer research biologist Elina Garrison.

Some hunters believe deer from other states released in Florida years ago is one of the reasons why the deer rut here is the widest-ranging of any state – from July in extreme south Florida to early March in extreme northwest Florida and the Green Swamp Basin.

“While it seems unlikely that genetics due to restocking is the only explanation for the variation in Florida’s breeding dates, there is some research that suggests it may play a part,” Garrison said. “Florida, as were many other southeastern states, was part of restocking efforts in the 1940s through the ’60s when deer were introduced, mostly from Wisconsin, Texas, Louisiana and Pennsylvania.”

The reason the rut varies so much in Florida is that it can, Garrison said. Florida’s relatively mild climate and long growing season allows fawns to be born at various times of the year.

“As far as I know, there are no other states where breeding occurs as early as July and August as it does in extreme south Florida,” she said. “The rut is timed so fawns are born during the driest time of the year, giving them the greatest chance of survival and allowing them to grow to an adequate size before the beginning of the wet season in June.”

Although it is a popular theory among hunters, Garrison says several research projects have proven there is no relationship between the rut and the moon phase.

“The breeding chronology study we did shows that conception dates within an area vary as much as from nine to 110 days, with an average of 45 days, and most does breed within 60 days, meaning rutting activity can occur over a two-month period,” Garrison said.