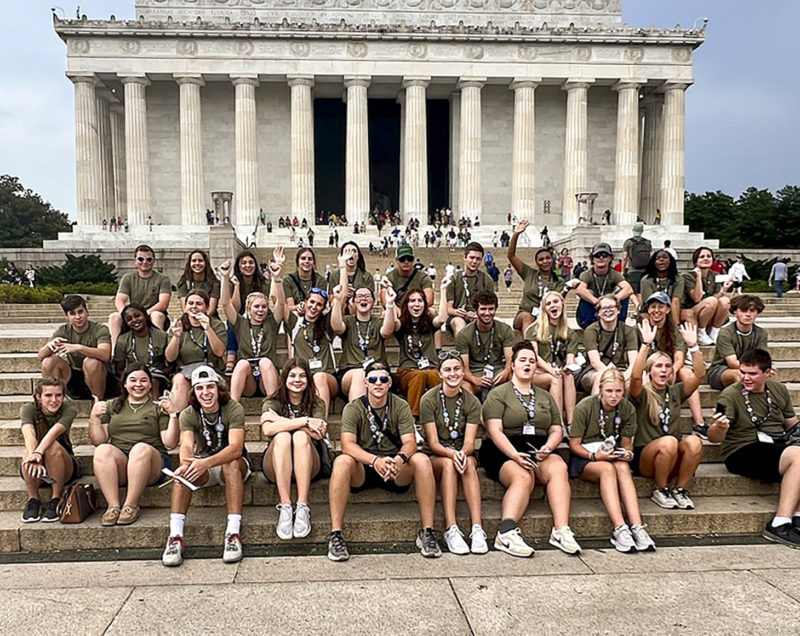 Being involved in his community is in Morgan Griffin’s blood. Both of his grandfathers held local office, and Griffin says they both have a big influence on his life.

As a result, being a part of the 2022 Youth Tour and seeing how local, state and federal government works was a significant opportunity for the Jasper resident.

“I’ve always been in tune with politics,” Griffin says.

For more than 40 years, SVEC has chosen area high school students to participate in the Youth Tour. Eligible students must be in the 11th grade, have a minimum weighted grade-point average of 3.0 and submit a 250 to 500 word essay.

7 students were selected to tour the state capital of Tallahassee in February. They also observed a mock trial at the state Supreme Court and debated and voted on a mock House bill.

After the Tallahassee tour, the cooperative selected Griffin, a junior at Hamilton County High School, to represent SVEC at the National Rural Electric Youth Tour in Washington, D.C.

During this fully paid tour of the nation’s capital, the students saw the historic sights of Washington, D.C., and had the opportunity to meet with legislators who represent Florida.

Participants are encouraged to mingle, and one way of doing that is by swapping pins from their respective states.

“Trading pins with the others was a lot of fun,” Griffin says.

“We had a competition for who could get the coolest pins. One guy from Arizona made his own pins and was giving them out. Everyone was after them because they were the most rare.”

Griffin says it’s hard for him to choose a favorite highlight of the trip, but he really enjoyed visiting Arlington National Cemetery and watching the changing of the guard at the Tomb of the Unknown Soldier. “It was just amazing. The whole sense of patriotism was very strong there,” he says.

The group also toured Mount Vernon and the United States Holocaust Memorial Museum. Griffin says he was moved to tears by the survivors’ stories.

“Seeing all of that was hard, but it taught me a lot,” he says. “We learned about the struggles Jewish people and other minorities went through. I think it’s important. I was shaken up, it’s hard not to walk through that and not be shaken.”

Griffin thanks SVEC for the experience.

“Coming from a small town, we don’t get many opportunities like this, and I’ve been very fortunate to share this experience with my peers,” he says.

This was the first in-person youth tour since 2019, due to COVID-19 restrictions and shelter- at-home precautions. Hounshell worked at Talquin Electric Cooperative in Quincy, Florida before the pandemic and this was her first year to plan the statewide event. While the last two years’ tours had virtual components, she says it’s just not the same as being there in person.

“I love seeing students who are shy open up,” she says. “Some have never been on a plane or even left their hometown before.”

Some students even choose their college major because of something they learn on the trip. “It’s amazing to see what kind of impact the tour can have,” Hounshell says.

“Over time, memories of some of the sites and monuments we see may fade, but seeing the long-term connections the kids make with each other is very special,” she says.

SVEC Accounting Coordinator Crystal Udell saw things come full circle about two years ago. While cleaning out a closet she found a scrapbook she’d kept her senior year of high school. Inside the book were all the pins she collected from kids from other states when she represented SVEC on the 2006 Youth Tour.

“It was about a week before I started my job at SVEC and I saw those state pins,” she says. “It’s amazing how different times in your life can come together.”

Udell says any student who is thinking about applying for the Youth Tour should just do it.

“This is an experience that may come along once in a lifetime and it will not only give you the opportunity to meet others from all around the country, but also expand your knowledge of American history.”